Hey! I’m azaraih and I (and somonastic) developed the demo for Deadnettle Creek during NaNoRenO 2019! It’s been a couple weeks since the end of March and things have calmed down a bit, so I thought it would be a good time to share some thoughts on how the process went.

This is the first game that somonastic and I have released publicly, but it’s actually our second time doing NaNoRenO. Last year, things went a lot less smoothly and we didn’t manage to finish or release anything at all. So some of our success this year came from learning from our mistakes and trying hard to make sure they didn’t happen again.

Our #1 goal for NaNo 2019 was to finish something polished with a manageable scope. Our 2018 NaNo project was overly ambitious for the 1 month timeframe, with complicated gameplay and multiple minigames planned. So for this year I wanted to do something more straightforward, where I could focus more on writing and drawing instead of spending all month on programming something extremely complex.

We ended up succeeding at this, and though we did finish after the official March 31 deadline, we made it in time for the itch.io jam deadline. The programming effort was minimal, which allowed me to put more work into the visual design and other elements. Even though I love working on programming, I think this was the best choice, and now that the demo is complete I can add more complicated programming into the full game wherever it makes sense.

Another goal I had was to create some digital art. I hadn’t done much art other than quick pen sketches for a while, and I had a new tablet laptop that I still hadn’t tried drawing on after having it for months. This seemed like a good opportunity to give it a try and get out of my comfort zone. When developing the visual style of the game, we ended up going with a hand-drawn look so I could try out some textured brushes.

Overall, working on the art was a great experience since I got to draw characters, backgrounds, and UI elements and it all turned out looking nice and cohesive. And somonastic did a great job on the special effects too, I feel like they added a lot to the game. It was also cool collaborating with her on the art and we developed a good process for this. For example, for the microwave background I drew the initial sketch, somonastic sketched in all the cool details, and then I did the final art and colors.

In the end, the art turned out to be one of my favorite parts of the game. Because it’s been a while since I’ve put any art out there for people to see, I’m happy that I’ve been hearing from people that they liked the artwork. 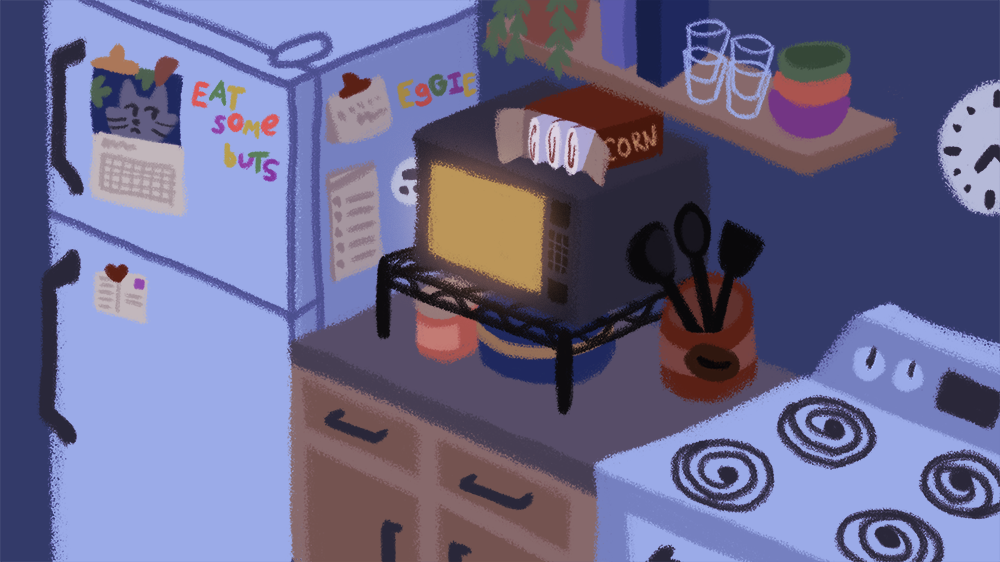 We tried out using Trello for listing out tasks, categorizing them by type, tracking their status, and assigning responsibilities. This was really helpful and it gave us a good way to see where we were at. Having a way to keep track of and visualize all the things we wanted to add was really nice, and I would use it again on future projects. 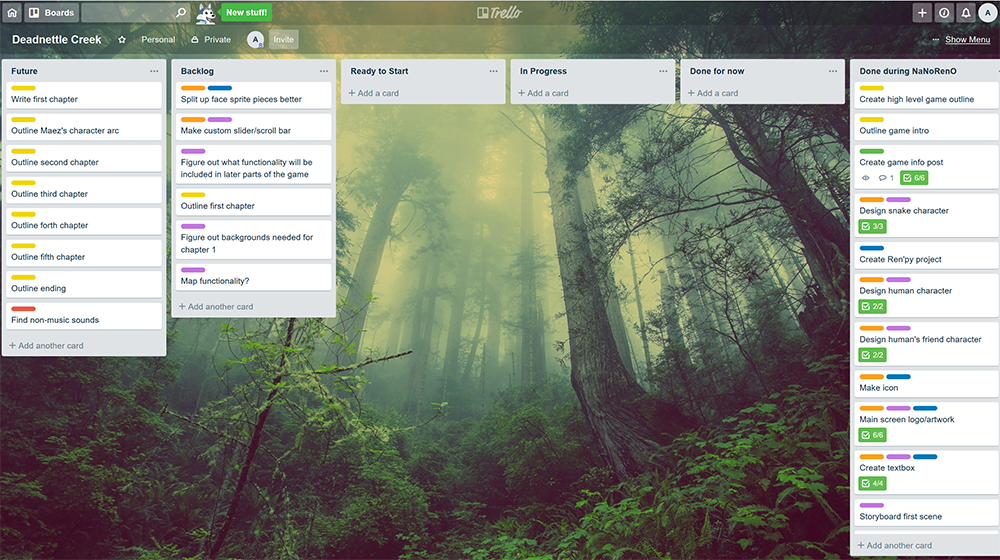 Talking to other NaNo participants:

It was great talking to other people working on NaNoRenO this year! I tried doing this last year also, but this year I did more of it and it was a good experience. It was encouraging hearing people’s comments, and it pushed me to keep working hard so I could show our progress. I’m still slowly making my way through people’s games, and it’s so cool to see how everyone’s projects turned out.

Things that didn’t work as well

Looking back, we could have improved on our time management. The first half or more of the month was spent on the first half of the game (the outdoors scenes at the creek), and once those were finished I was feeling pretty confident about our progress. I even considered adding more content to the game than originally planned.

But as we started work on the second half of the game (the apartment interior scenes), I started realizing that it was going to be a lot more work than the first half. If you’ve played the demo you probably noticed how much more complicated it was, with two additional separate sets of character sprites, special effects, and more detailed background images.

It was worth it to do all of the extra work since it turned out well in the end, but it’s definitely the reason we ended up going past the official March 31 deadline. I learned from this experience that it’s good to do more planning and assessment of each thing you want to accomplish, instead of just assuming, oh if scene 1 took this long, scene 2 should be about the same.

This isn’t that big of a problem, but I’m mad at myself for not constructing the sprites well. I typically create sprites using LiveComposite and ConditionSwitch to easily switch out different expression images, and I usually control each part of the face with a separate variable (eyebrows, eyes, mouth, etc.).

But for some reason, this time I thought I would take a shortcut and just have one variable that controls the entire expression. It’s a short game so I wouldn’t need that many expression variations, right? Nope. I ended up wanting to use so many combinations of facial features that it became a pain to keep them all straight. So when I created the additional sprites in the later scenes, I set them up properly and it was much easier to deal with. So taking a shortcut wasn’t worth it at all. I’ll for sure go back and redo the bad ones when working on the full game. 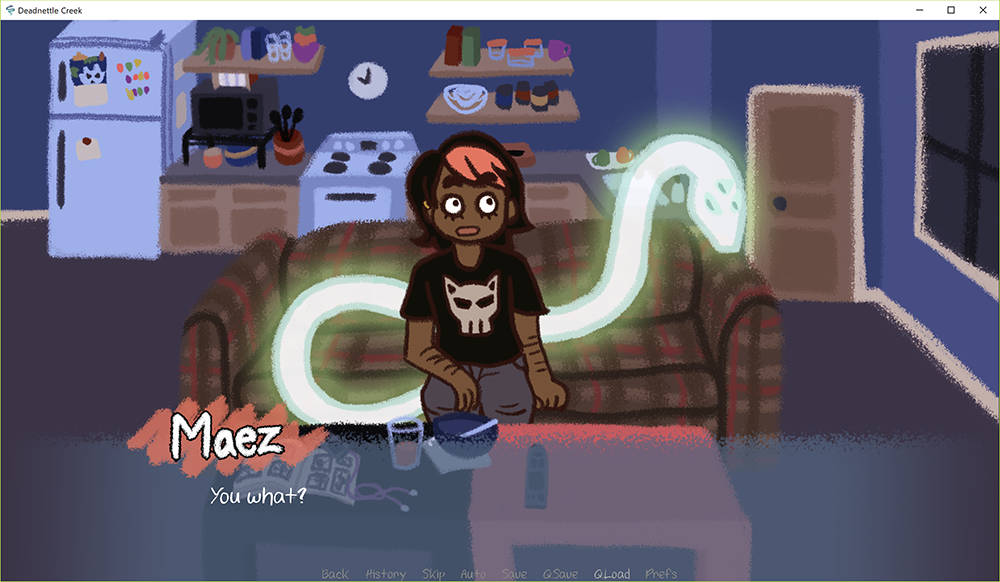 In the future it would be helpful to do more testing, and have a plan or checklist of the things we want to test. This wasn’t a huge problem this time since it was a small demo with not too much that could go wrong, but I don’t feel great that we only did testing on the very last day so it was pretty rushed . Thankfully the only issue we discovered was that we forgot to set up a custom icon for the game, but if we’d found more problems we wouldn’t have had much time left to resolve them.

I had a really good experience with NaNoRenO this year, and I’m happy with what we accomplished. Even though it took a little longer than expected, we still finished in time to submit the project, and the other bad parts of the process weren’t really that bad when compared to how much went well. After the much worse difficulties we had last year, I’m really glad we pulled through this year and actually completed our project. It’s exciting to finally have something out there for people to play, and I’m looking forward to continuing this project and releasing the full game. We’ll keep working on it and hope you’ll look forward to the finished version!

Thanks so much for reading!

Disillusioned millenial gets possessed by a nature god